Posted by David Mason on October 8, 2012
Posted in: Game in a Week, Unity3D. Leave a Comment

I have to say this project is off to an excellent start. Unity makes throwing together a basic environment with some simple objects very easy, so I was able to get a play area with a crowbar, a couple of enemies and some scientists put together in very short order, and had enough time to make a reasonable start on the coding. 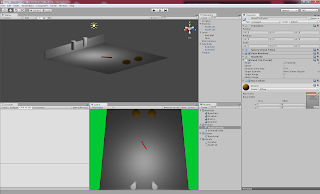 The crowbar moves around with mouse movement, the enemies make their way down the play area in hops and leaps until they get in range of a scientist, then they leap at him and spend the rest of their life attached to (i.e. hovering above) his head. The crowbar can be used to shove the enemies around too, which was not directly intended yet but does make the game basically playable. 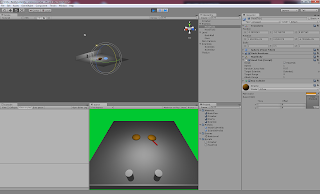 Everything in the scene is pretty basic for now: the play area is a grey plane with a rectangular prism wall at the back (added to stop the scientists tumbling off the edge when the enemies run into them); the crowbar is a skinny rectangular prism in an attractive red; the enemies are squashed spheres, with a box collider as the sphere collider was making them roll; the scientists are simple cylinders. 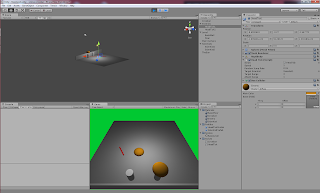 If I’ve made good progress with the core gameplay by the weekend, I may have time to mess around in Blender and make some simple models, but that’s a whole 4 days away so I’d best not get ahead of myself – I certainly don’t need fancy models to make it work.

I’ll aim to give the enemies health, give the crowbar the ability to take it away, and have the enemies spawning rather than just having a few at the top from the start. There should also be time enough to have the scientists spawn programatically, and have the game end when they’ve all been attacked. If I get through all that with time to spare, I’ll get some basic menu together, but that’s getting ahead of myself again.