Don’t worry! It isn’t lose as in development-failure, just that the loss condition is now implemented so it is possible to lose the game. Today’s development was steady and I covered most what I wanted again, with a lot less problems than yesterday. I even made a quick fix to my collision issue before work thanks to a tip from Doolwind.

I added some extra walls to keep the enemies in, and added inert box colliders to the spawners to make their scale visible, since I’m using it determine the area in which to spawn things. 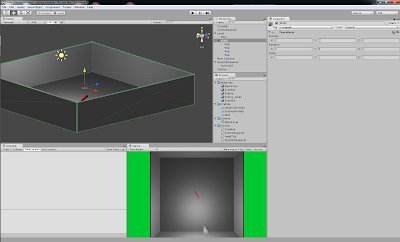 With the scientist spawner able to determine when all the scientists have been attacked, it was time to add some higher-level choreography to the scene. I created a basic game control script that keeps track of game state and game mode, with a few methods the spawners can hook into to report important events (enemy and scientist deaths). I added a display for score (just the number of enemies killed at this stage), and a simple label to indicate game over state.

Finally, I had the game controller hook into the enemy spawner and start turning things up as the score increases, for basic difficulty scaling in survival mode. This only works up to a point, as the enemies have a lot of trouble once they start to pile up, but it’ll do for now.

I didn’t get to the win condition or campaign mode today, so those are first on the agenda for tomorrow. Campaign mode will be made up of levels that have an increasing number of enemies to defeat, gaining an extra scientist between levels. I don’t anticipate a lot of complications, just a bit of rearrangement in the spawners and a bit of extra state for the controller, so I should also have time to add the science stat, and possibly move the crowbar up and have it swing down on mouse clicks (for a more satisfying bludgeoning experience).